City Council votes to proceed with the Mixed Use Project

Downtown Commons Advocates regard as misguided the Santa Cruz City Council’s adoption of a resolution to move ahead with planning a Lot 4 mixed-use project. The decision is based on a failure of city planning to give adequate consideration to the future of Downtown Santa Cruz as a whole. Downtown Commons Advocates plan to use legal and political remedies to stop development of this project, and we call for other civic groups and citizens of Santa Cruz to join with us.

To meet the deadline for use of Measure S funds, the City Council needs to move ahead soon. Reconstruction of the Downtown Library on the existing site is the most attractive, viable plan to do so. We encourage the City Council to reconstruct a first-class library on its existing site. The Council should not combine a library with an expensive and unneeded parking garage and it should reject using affordable-housing fees to cover the library funding gap.

There are two additional, interrelated problems with the Council’s resolution.

First, the Subcommittee evaluation matrix shows that in comparison to the basically shovel-ready Civic Center library reconstruction project, the Lot 4 project is much less likely to be completed before the library bond deadline. The Lot 4 project faces substantial and unpredictable planning, funding, design, environmental review, and political challenges.

Second, building a new library as part of a mixed-use project on Lot 4 represents a bait-and-switch use of Measure S funds, and the public is overwhelmingly opposed to Lot 4 development. Emails to the Council run around 75% against the project. As the 2013 death of the de-sal project demonstrates, voters have the means to stop an unpopular project.

The City Council runs very real risks when it disregards popular opinion. In particular, it risks losing public support for future ballot measures and losing citizen trust in government. The people of Santa Cruz deserve better from our elected officials.

Click HERE to learn what you can do to continue to support a Downtown Commons and the Farmers Market at the Cedar Street location.

We Rallied for the Library

On June 18, 2020 over 60 supporters rallied in support of remodeling, renovating and rebuilding the Santa Cruz Downtown Branch Library in it's present location in the downtown Civic Center. 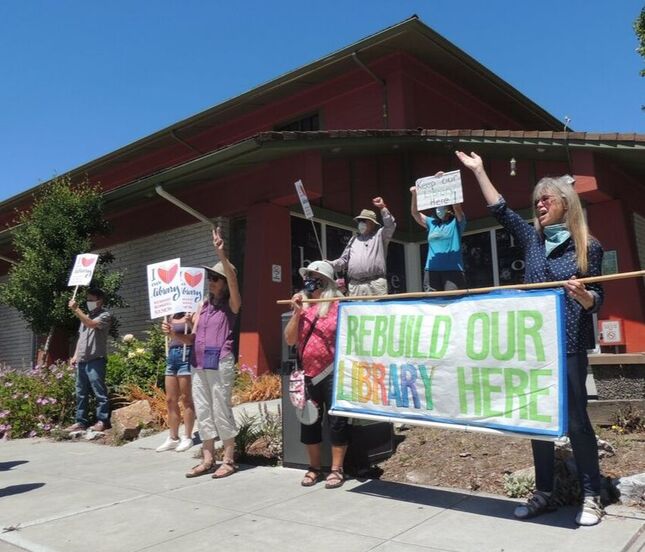